Rosenquist created F-111 for his first solo show at New York’s Leo Castelli Gallery: the dimensions of its fifty-nine interlocking panels were determined by the four walls of that particular space, so that the work, once hung, would surround and enclose the viewer. An F-111 fighter-bomber stretches the length of the painting, enveloped and overtaken by oversize images culled mostly from photographs and printed advertisements, including a wallpaper-like floral pattern, an angel food cake, a Firestone tire, light bulbs, a fork stuck in spaghetti, and a beach umbrella superimposed on an atomic blast. With its jumps in scale, its collage-style juxtaposition of image fragments, and its vivid palette, the painting exemplifies Rosenquist’s singular contribution to Pop art.

F-111 was painted in the middle of one of the most turbulent decades in US history. The fighter-bomber it depicts was, at the time, in the planning stages, and Rosenquist understood its mission to be as economic as it was military—to create jobs for Americans and support the country’s gross national product. He characterized the imagery of the painting as “a plane flying through the flak of an economy,” with the little girl under the metallic hairdryer as its pilot; he described its underwater diver in more ominous terms, as evocative of humans gasping for air during an atomic holocaust. 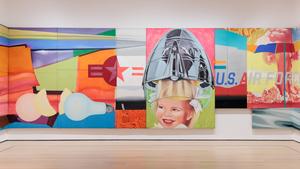