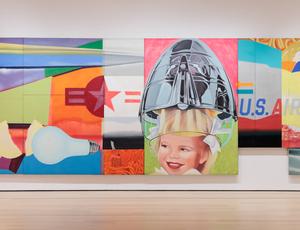 The Museum of Modern Art

In 1964, Rosenquist began gathering photographs and information about the F-111 fighter-bomber then in development for the United States military. From these materials he devised the concept for a painting that would incorporate imagery of the warplane, creating extensive collage studies and beginning work on the massive painting in his Broome Street Studio in SoHo, lower Manhattan. Built to the specific measurements of the front room of the Leo Castelli Gallery in New York, the work measured ten feet high by eighty-six feet long when complete and was presented at the Castelli Gallery in spring 1965. Covering all four walls, the painting invaded the visitors’ peripheral vision, with images of consumer products superimposed over the length of the plane depicted from nose to tail. Using the visual language of advertising, Rosenquist created a work that was anything but mundane and pedestrian.